The physicians at Weill Cornell Medicine/NewYork-Presbyterian are dedicated to the pursuit of breakthrough research, and the safe and ethical management of clinical trials. Research study volunteers play a critical role in determining the effectiveness of new therapies and treatments. By participating in clinical trials, you may gain access to new research treatments before they are widely available. Healthy volunteers are also needed for many studies.

The mission of the Aaron Stern, MD, PhD Program in Psychodynamic Psychiatry is to advance training and education of psychodynamic approaches to treat personality disorders.  Made possible by a generous gift by Aaron Stern, M.D., Ph.D., and Betty Lee Stern, the Stern Program builds on Weill Cornell Psychiatry’s excellence in the tradition of psychodynamic psychiatry, an approach that has proven to be one of the most effective treatments for personality disorders.

The Weill Cornell Institute of Geriatric Psychiatry was established in October 1994. Its mission has been to conduct ground breaking research in late-life psychiatric disorders, train future research and clinical leaders in Geriatric Psychiatry, and provide high quality specialized care to older adults.

Substance Use and Stigma of Addiction Program

The mission of the Program for Substance Use and Stigma of Addiction is to examine and help develop interventions to improve clinicians’ attitudes towards patients with substance use disorders.  He is also focused on educating all physicians on how to treat individuals with co-occurring substance use disorders and mental illness.

Substance Use and Stigma of Addiction Program 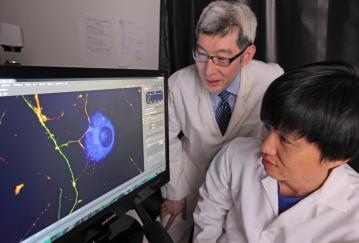 Weill Cornell Medicine psychiatrists utilize a unique research approach that advances psychiatric care through highly integrated studies of human subjects and animal models. In this approach, human genetic variants that affect behavior are introduced into the genome of animals, allowing for precise analysis of their effects on neural function, cerebral circuitry and behavior. This information is then used to guide testing for similar effects in humans who carry the same variants, in order to, ultimately, understand the role that genes play in the risk of psychiatric disorders and target specific treatments for patients most likely to respond to them. To implement this vertically integrated translational approach, investigators with expertise in the areas of animal neurobiology and behavior, human genetics and neuroimaging and developmental neurobiology work closely to design experiments that allow close translation of animal results to humans. This approach has led to the identification of genetic variants as predictors of treatment response for psychiatric disorders. 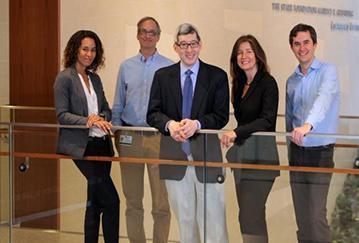 Sackler Institute researchers investigate cerebral development, using new techniques to study developing children in order to transform clinical methods. The institute's program of research and training emphasizes functional neuroimaging as well as genetic and behavioral influences on cognitive and emotional development. The Sackler Institute is both wide-ranging and influential in its technical approaches to the study of children. In just a few years, it has become one of the best research centers in the world for the neurocognitive study of children.

Center for Autism and the Developing Brain

The CADB is jointly sponsored by NewYork-Presbyterian Hospital, Weill Cornell Medical College and the Columbia College of Physicians and Surgeons, in partnership with New York Collaborates for Autism. Led by founding director Dr. Catherine Lord, an internationally recognized Autism Spectrum Disorder (ASD) assessment and treatment expert, the CADB provides comprehensive, expert assessment and care in an elegant, state-of-the-art setting for individuals living with ASD and other developmental disorders of the brain. CADB faculty members are engaged in cutting-edge research and provide clinical, educational and investigative training for professionals of all levels.

NYP Center for Autism and the Developing Brain

DeWitt Wallace Institute of Psychiatry: History, Policy, & the Arts enables Weill Cornell Medicine psychiatrists to carry out, encourage and advise scholarship concerning a broad range of historical and political topics relevant to the present day theory and practice of psychiatry. Housed within the institute is the Diethelm Library, one of the greatest libraries in the world, with over 35,000 books, some of which are rare and historically significant. A comprehensive website also offers access to these works for scholars all over the world. This unique resource distinguishes Weill Cornell Medicine psychiatric education and attracts academic faculty, scholars and trainees.

The NYP Personality Disorder Institute is a center internationally recognized for the study of personality disorders, with a wide range of borderline personality disorder projects. Weill Cornell Medicine clinical investigators have long been leaders in the institute's studies of phenomenology, dynamics, diagnostic methodology and treatment of patients with severe personality disorders. Biological and comparative therapy approach studies are currently underway at the institute, which features a variety of full-time and voluntary faculty positions and offers extensive training opportunities.