About the Oskar Diethelm Library 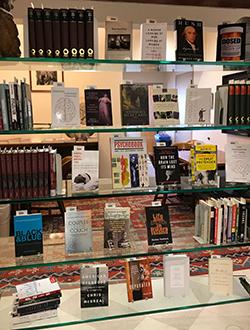 The Oskar Diethelm Library is a special collection devoted to the history of psychiatry. It is part of Weill Cornell Medical College's DeWitt Wallace Institute of Psychiatry and includes approximately 35,000 titles. Journal holdings include long back runs of psychiatric journals as well as current journals dealing with the history of medicine, psychiatry and psychology (see Journal Holdings). Archival holdings include the papers of numerous organizations and individuals (see Archives and Manuscripts).

The Library counts among its holdings nearly every edition of the monographs of such important figures as Emil Kraepelin, Sigmund Freud, Isaac Ray and Benjamin Rush. The Library holds significant collections of works in such areas as the history of hypnotism and psychoanalysis, the American mental hygiene movement, and the temperance movement, as well as religious and medical debates on witchcraft, suicide, and sexual behaviors. There are also many early and rare first-person accounts of psychiatric illness, alcoholism, and drug abuse. An impressive collection of hospital and asylum reports of the 19th and early 20th centuries has been amassed, amounting to more than 3,500 items.

The manuscript division of the Library has grown in importance as a repository for the unpublished papers of many organizations and individuals vital to the history of psychiatry. It is the official depository of such institutions as the Group for the Advancement of Psychiatry, the American Psychoanalytic Association, and the Cheiron Society. Its holdings of the papers of D.W. Winnicott and David Levy make it an important resource for the study of child psychiatry and psychoanalysis. There are also notable holdings related to the American mental hygiene movement and biological psychiatry, and letters by Clifford Beers, Sigmund Freud, Morton Prince, William James, G. Stanley Hall, Johann Spurzheim, Andrew and George Combe, Herbert Spencer, August Forel, S. Weir Mitchell, and Harry Stack Sullivan to name a few.

From its earliest days, numerous scholars have worked in the Oskar Diethelm Library, publishing their discoveries as articles or books. The list includes:

The library is open to researchers in the history of psychiatry and related fields by appointment. To work with the library collection, please contact Special Collections Librarian Nicole Topich, MLIS, at nrt4001@med.cornell.edu or (212) 746-3728